As there are still no tube-friendly speakers chez Kennedy I hooked the Stingray II up to PMC twenty5.26i floorstanders, these aren’t particularly efficient at 87dB but have proved to be well suited to low powered amps like this in the past. That said I did stick with the Stingray II’s ultra-linear operation because the actual 18W isn’t quite enough, to get a good result with that sort of power you’d need a 90dB+ sensitivity speaker with an easy load. As it was I needed to pull the PMC’s away from the wall because the amplifier has less grip in the bass than the high powered solid state amp generally used. The sound remained softer and warmer but the bass was tuneful and adequately controlled, it will come as no surprise to hear that this isn’t really a headbanger’s amplifier, it’s primarily for music lovers looking for an effortless way to enjoy their tunes.

A job the Stingray II does with considerable charm and transparency where it counts, by which I mean the mids and highs which are the clear strongpoints and make everything played sound that little bit better than usual. Abdullah Ibrahim’s piano on Africa, Tears and Laughter [Enja] is full of character, the way that he strikes the keys is very distinctive and hard, making the instrument sound older than it is and the Manley makes this very clear. It also makes the harmonised saxophones sound glorious, their tonal radiance in full effect with none of the glare that many amps add to the mix. Timbre, the specific tonal character of each voice and instrument, is superbly rendered here and this brings out the feeling in every performance rather well. Lest that make it sound like it’s lush and rose-tinted it’s worth mentioning that small differences in recordings are easy to perceive, I played two versions of ‘Gimme Shelter’ [The Rolling Stones, Let It Bleed, Decca] each with a different sample rate, the 176kHz version proving to be more open and clean than the 88kHz, yet somehow the more grungy sound of the latter seemed more correct. I also found a few versions of the Small Faces’ ‘Tin Soldier’, the first of which [Small Faces, Weton-Wesgram] seemed thin and bright, while the Singles Collection [Essential] had forward cymbals but the voice was massive. The winner, however, was from There are but four Small Faces [Immediate], which is fatter and fuller with the keyboards more in evidence and Steve Marriott’s phenomenal voice in the left channel. 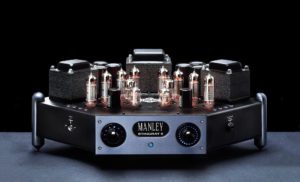 Whatever you play though there is a fluidity to the sound that makes it extremely compelling, the Stingray II makes a lot of amplifiers sound mechanical, as if they are having to go through more processes to deliver the music. The limited power means that dynamics are limited of course but any compression sounds entirely natural, the absence of hard clipping is a fundamental part of what makes tubes appealing. It even makes them sound more powerful than they are. Sticking on this technology’s natural partner, vinyl, was an absolute blast and anything with a groove made it very hard to sit still and impossible not to grin. What more can you ask of a piece of audio electronics than to enhance the joy of music in the home? I know that music is a serious affair for many but we’re in it for the emotional connection and this funky amp is rather good at that.