What follows is Part 4 in a four-part series of snapshot-style reports on new (or at least new-ish) personal audio products seen at CanJam RMAF 2017.

For the sake of clarity, we have broken out coverage into four segments: 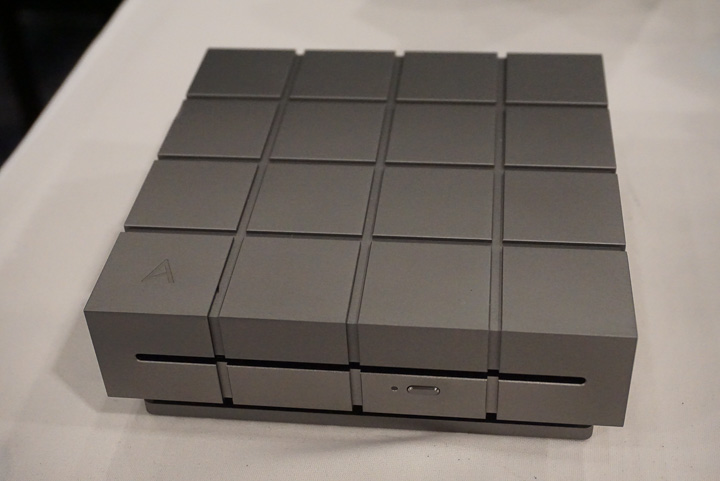 Astell & Kern showed a new CD ripper that is compatible with Ethernet-enabled and recording-capable Astell&Kern personal digital audio players. The CD ripper rips CDs directly to the players, which gathers and stores metadata for ripped content via Gracenote. The ripper is priced at $399. 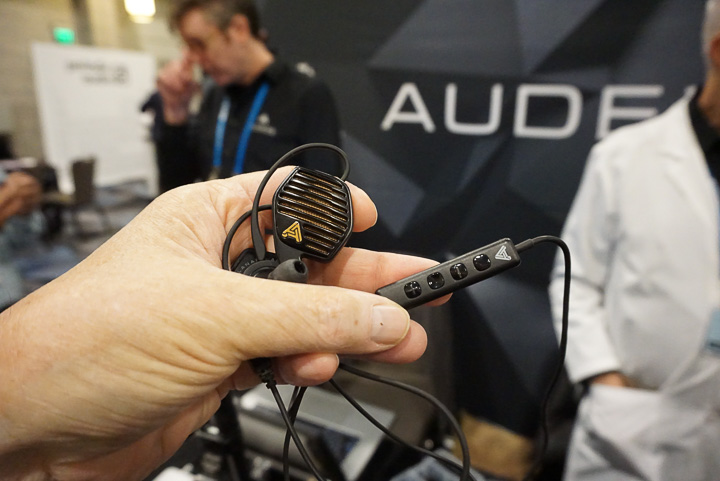 Readers familiar with Audeze’s excellent iSINE10 and iSINE20 planar magnetic earphones will likely know that one of the best ways to hear those models is through their optional, Lightning-compatible Audeze Cipher cables, which provide an inline headphone amp/DAC/DSP module complete with pre-programmed DSP-driven EQ corrections that significantly improve the frequency response of the iSINE models, giving them audibly more neutral voicing.

Audeze recognized that some though not all LCD-i4 owners might welcome the convenience of having an LCD-i4-specific Cipher cable and so the firm has developed one. However, Audeze’s flagship LCD-i4 planar magnetic earphones have much more neutral voicing than the iSINE models do and therefore need little if any DSP-driven EQ correction, so the LCD-i4 CIPHER cable is designed accordingly (that is, with minimal built-in EQ as contrasted to the iSINE Cipher cable, which has considerably more EQ dialed-in). Interestingly, the LCD-i4 Cipher cable isn’t something Audeze will sell, but rather is a gift the company will make available to LCD-i4 owners upon request and free of charge. Because the LCD-i4 is considerably less sensitive than the iSINE models, the LCD-i4 CIPHER cable is a balanced output design with about 6dB more output than the iSINE-version CIPHER cable. 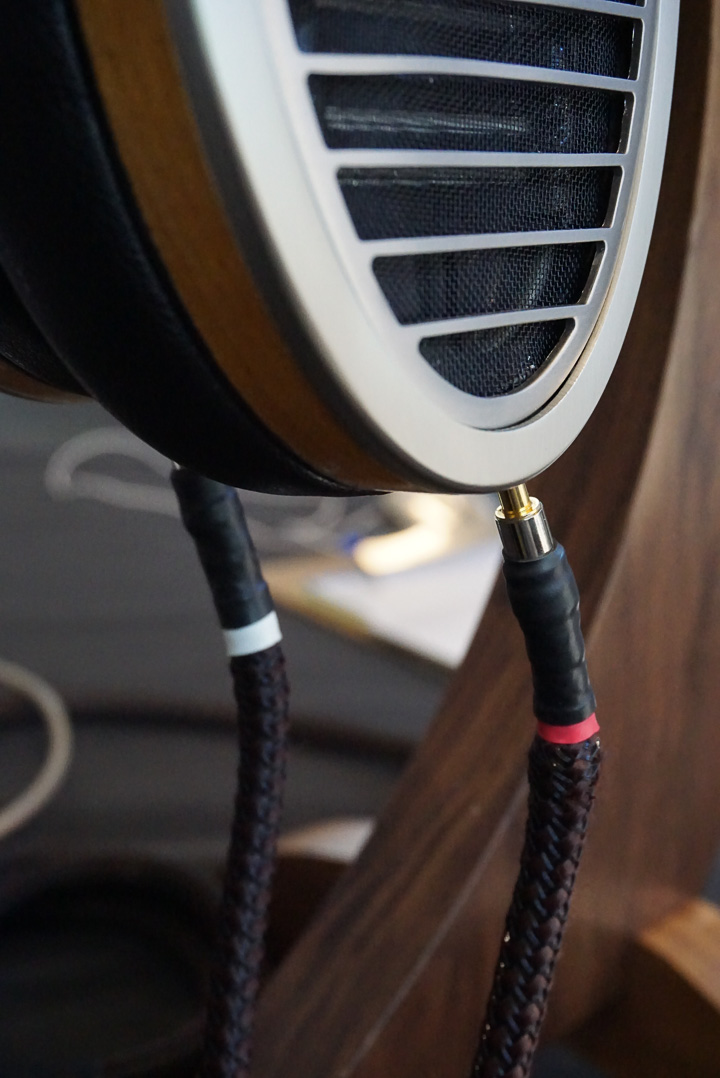 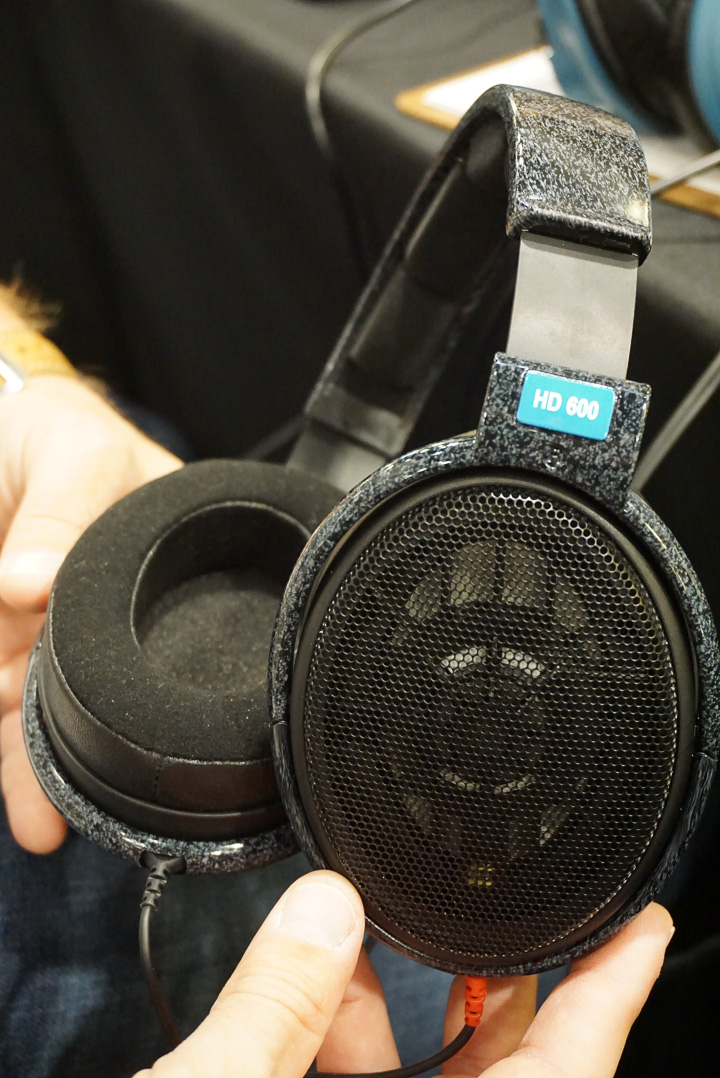 Dekoni offers luxury-grade alternative ear pads for many popular headphones and two offerings that were drawing a lot of attention at CanJam were the firm’s beautiful ear pads for the Sennheiser HD 800 ($99.99) and pads purposely developed for Sennheiser’s HD 600-family headphones (e.g., the HD 580, HD 600, HD 650, and the new Massdrop x Sennheiser HD 6xx; priced at $59.99). The HD 800 pads sets will become available in 6-8 weeks, while the HD 6xx pads should appear on the market within a month.

Note: There is real synergy between Dekoni’s ear pad offerings and Sennheiser’s Massdrop x Sennheiser HD 6xx headphone, which a Massdrop spokesperson indicated was one of Massdrop’s post popular headphone ‘Drops’ to date. Apparently, many enthusiasts feel an optimal combination will be the HD 6xx headphone fitted with a set of Dekoni pads. 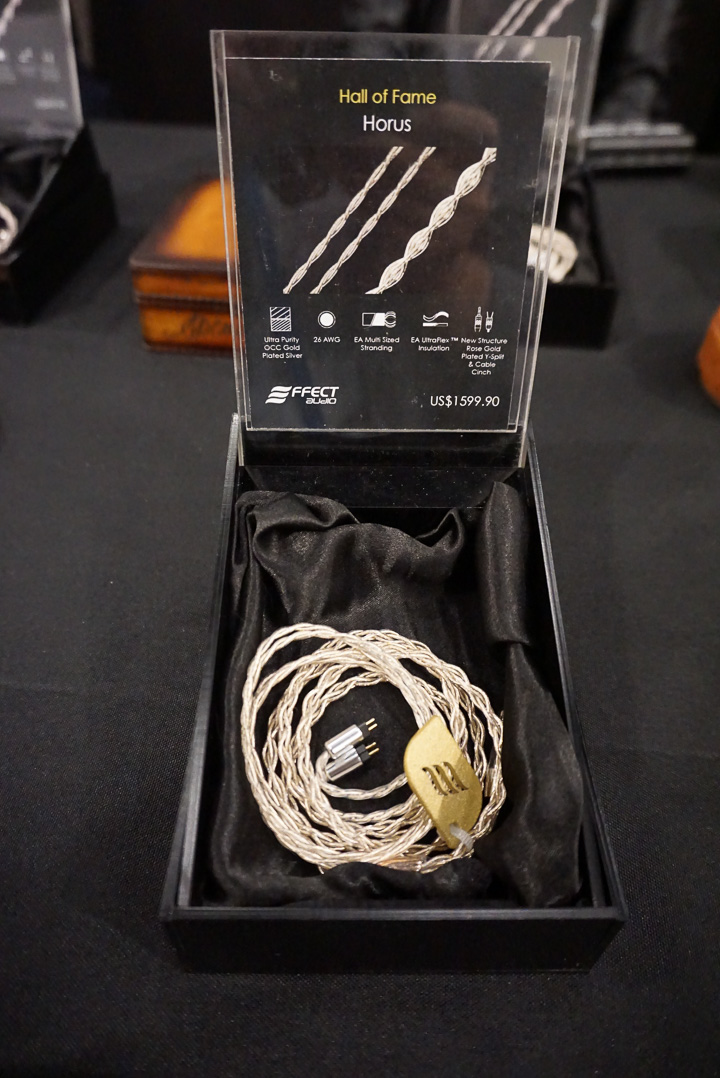 The personal audio cable specialists at Effect Audio were showing a new flagship earphone cable called the Horus, whose conductors are made of pure OCC silver with gold external plating. The cables are expensive at $1599/set, but arguably worth the effort for those who own true top-tier earphones. 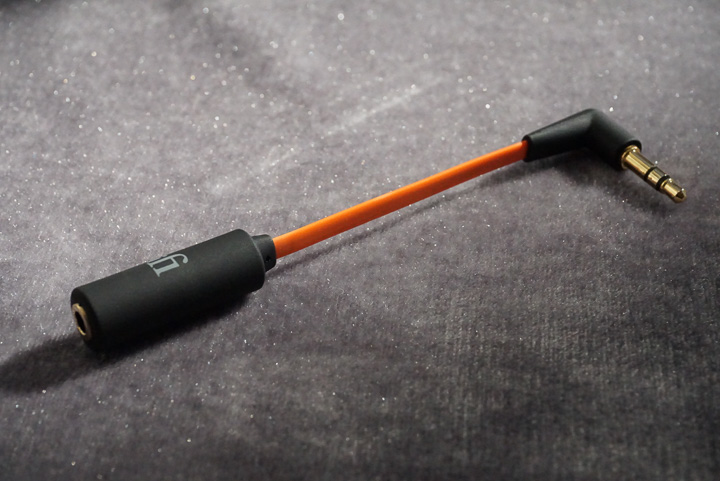 Have you ever found yourself on a long plane flight and thought it might be nice to listen to music or watch film through the aircraft’s entertainment system using your own high-quality earphones or CIEMs?. We have and the results typically are not pretty, largely because the lowest volume setting on the plane’s A/V system will typically be so loud as to fry your ears when you listen through high quality and high-sensitivity earphone and CIEMs. What’s to be done?

iFi offers two answers in the form of its original iEMatch device (which is very full-features but perhaps a bit pricey for some users) or the brand new Ear Buddy device, which sells for just $20. In essence, the Ear Buddy is a high fidelity, sensitivity compensation device that lets you use top-tier earphones with in-flight A/V system, but at sensible and pleasurable volume levels. As a result, in-flight entertainment goes from “Meh” quality levels (‘cause freebie airline earphones sound, let’s face it, pretty darned awful) to “Wow!” quality levels.

Speaking as an enthusiast iFi iEMatch user (I never go on long flights without an iEMatch device tucked in my earphone case), I’m glad to see iFi offer the scaled back (but equally high quality) Ear Buddy at a price almost anyone can afford. 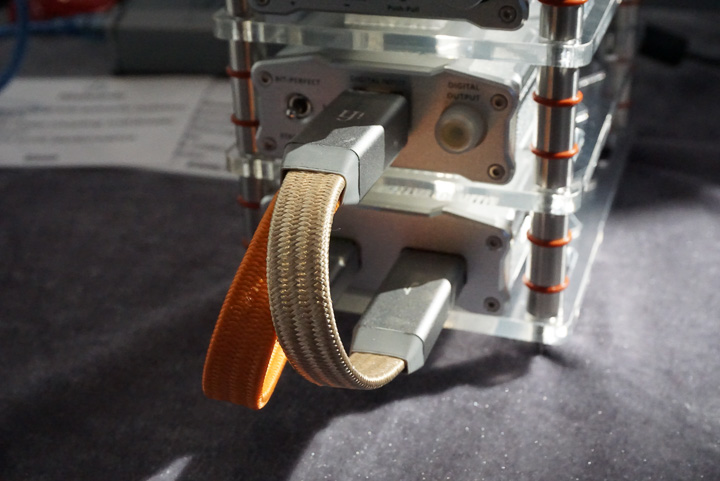 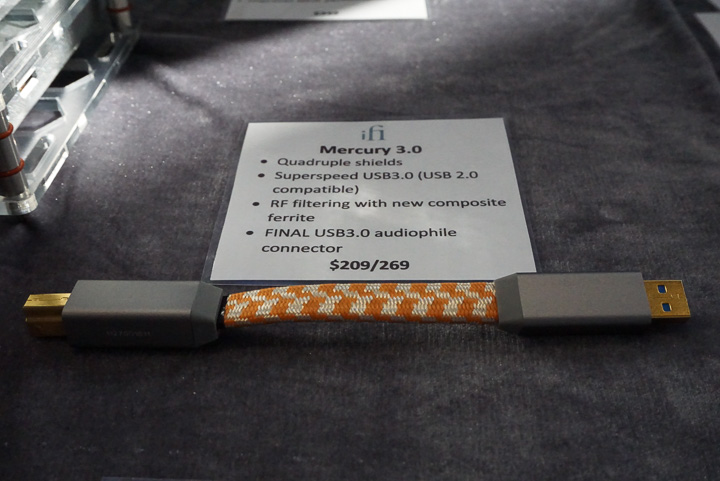 If the Gemini 3.0 is iFi’s finest USB cable for use with multi-USB port-equipped digital audio sources, the Mercury 3.0 cable is the firm’s best USB cable for applications where only a single USB data output port is available. 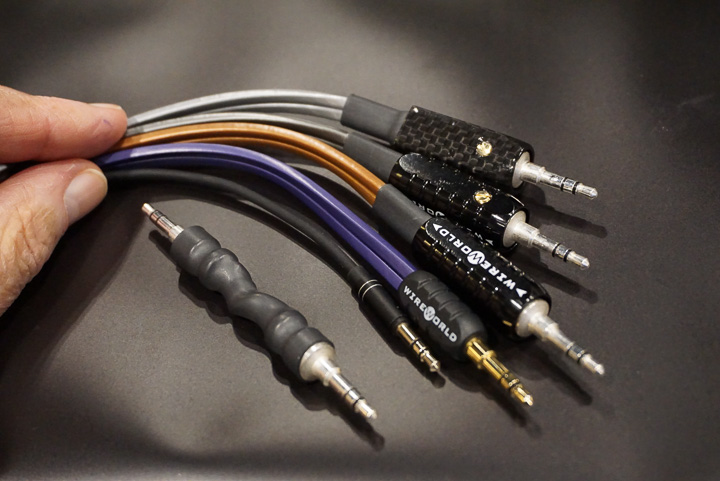 Wireworld offered an eye-opening demonstration, which it dubbed the “Audio Cable Polygraph Test’. The test is designed so that listeners can compare the sound of high quality headphones fed from an extremely short (and cable free) mini-jack to mini jack adapter vs. the sound of four different grades of Wireworld headphone cables. The concept is that the cable-free adapter should sound best of all (because no cabling is involved) while the various grades of headphone cables should, in theory at least, come progressively closer to matching the sound of the cable-free adapter.

The beauty of the demonstration was that it offered a useful standard for comparison (the adapter with no cable at all) and showed how that both cable materials and geometry do have a tangible impact on sound quality. 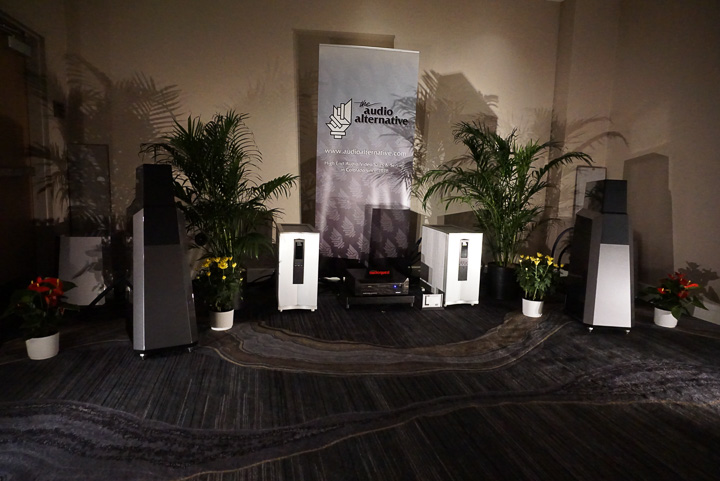 For me, some of the most beautiful, refined, and accomplished sounds to be heard at RMAF came from the Audio Alternative room, which used a Brinkmann Balance turntable fitted with a Lyra Atlas phono cartridge; a VTL electronics suite consisting of a TP-6.5 phonostage, a TL-7.5 Series III linestage preamplifier, and a pair of Siegfried Series II monoblock amplifiers; a speaker system consisting of Vandersteen Model Seven MkII loudspeakers supplemented by Dual Vandersteen Sub Nine subwoofers; and a complete loom of AudioQuest cables and power conditioning components.

As so often happens with VTL-driven systems, the sheer excellence of this system didn’t bowl the listener over with bombast, but rather won the listener over in a gentle and elegant but very persistent way with its unfailing mastery of textures, details, dynamics, and of realistic image and soundstage scale. Listening to this system was kind of like falling in love in slow motion: musical ecstasy at its best. 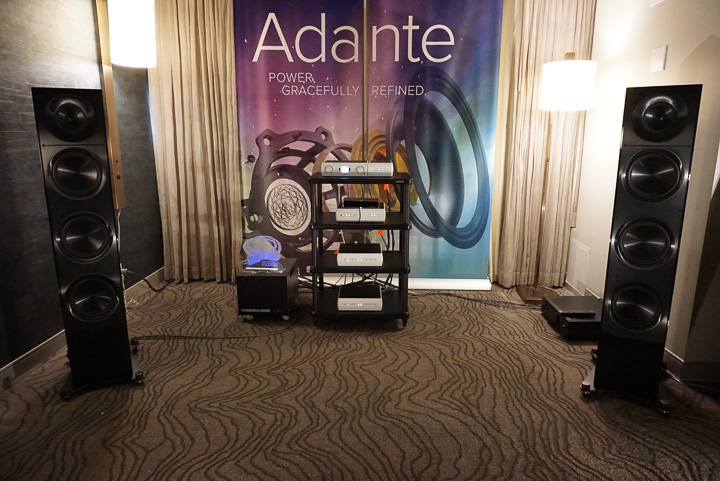 Andrew Jones has been on a role of late and never has this been more obvious than with his new Adante-series loudspeakers. To answer a question many have posed, yes, the ELAC Adante loudspeakers—and in particular the Andante AF61 floorstanders—are now in full production and shipping. (Indeed, Jones had air freighted one of the first production line pairs to RMAF specifically to show that the speakers were indeed finished).

But complementing Jones’ Adante speakers were the also excellent and also value minded ELAC (formerly Audio Alchemy) audio electronics from Peter Madnick.One of the main ELAC demonstration rooms featured the ELAC Adante AF61 floorstanding loudspeakers (~$4998/pair) as driven by a suite of ELAC/Audio Alchemy components including an Alchemy DMP-1 digital media player ($1795), DDP-1 preamp/DAC ($1995 with PS-5 power supply ($495), and a pair of DPA-1 mono power amplifiers ($1995 each), and an ELAC Discovery music server ($1099). The result was a roughly $14,400 system—not including cables or power conditioning—whose tightly focused, beautifully balanced, and essentially full-range sound could quite easily have passed for something anywhere from two to perhaps five times its price. This system offers a value benchmark that will not easily be beaten. 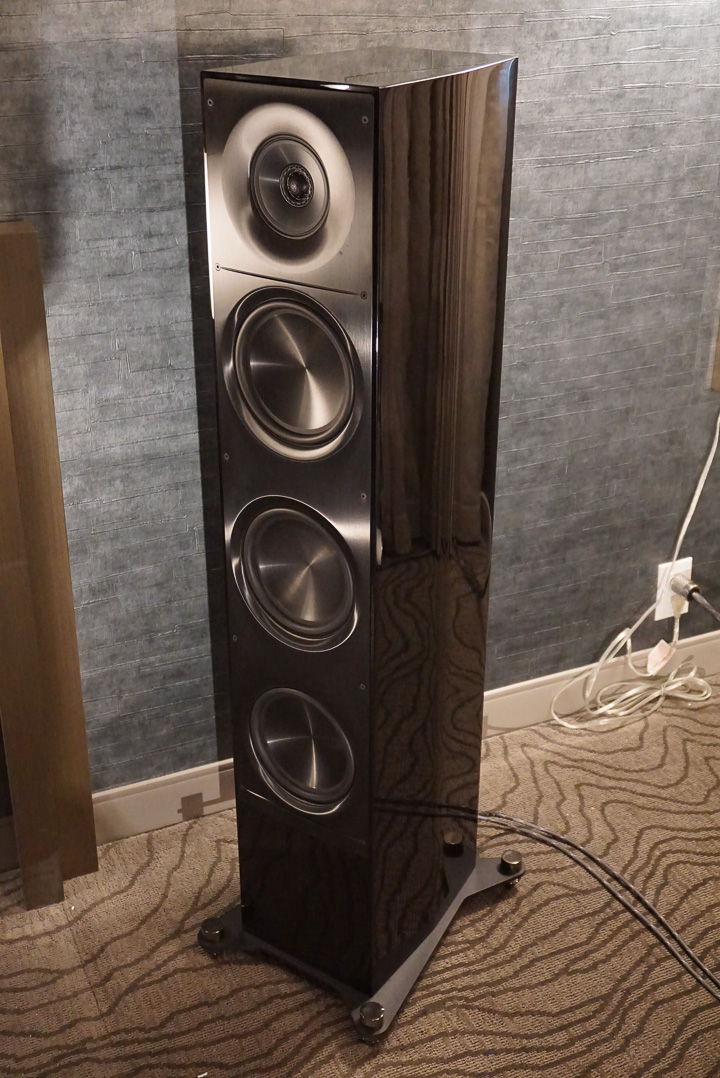 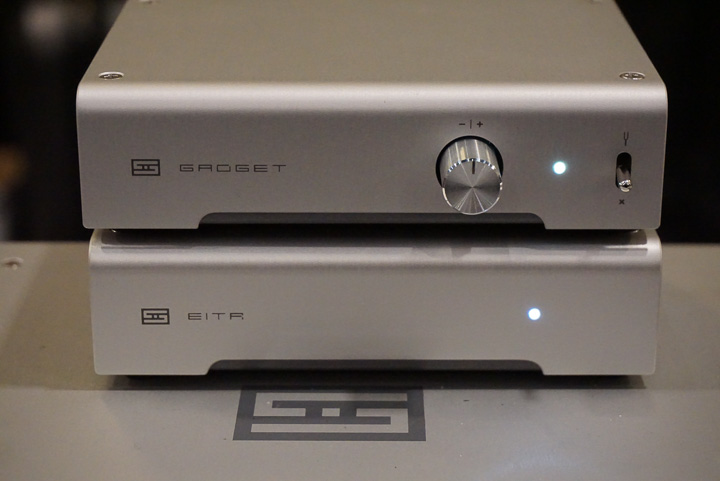 The Schiit Audio Gadget is one of those components that hardcore audio purists are likely to dismiss on sight—right up until the point they give it an open-minded listen. What is the Gadget and what does it do? Schiit describes it as a DSP-driven, real-time ‘Music Processor’ whose purpose is to allow users to alter the tuning of their favourite pieces of music without altering the tempo of the music in any way.

“Why,” purists will surely ask, “would anyone want to do that?” The answer, says Schiit’s chief digital audio architect Mike Moffat, is that standard contemporary musical tuning, where A = 440Hz, is a comparatively recent development. According to Moffat, many musicians (and instrument makers in the 19th and early 20th century used somewhat diffent tuning where C = 256Hz (which roughly equates to A = 430.2Hz, give or take a bit). Moffat made this discovery while try to ascertain why pre-WWII mandolins somehow sounded sweeter and more musically ‘right’ than modern mandolins seem to do. It turns out the answer is that many of those older mandolins were set up for C = 256Hz tuning. This led Moffat to wonder if all music might benefit from retuning to the C = 256 standard.

Many DSP-driven designs, tons of PhD-grade mathematics, and about a gazillion lines of DSP programming code later, the idea for the Gadget became a reality. The small processor accepts digital music files and processes them in real-time while allowing users to continuously vary pitch tuning from standard A = 400Hz tuning down to C=256Hz tuning, and than further down to C= 24z tuning. The challenge for the listener is to play a favourite piece of music and then to turn the tuning adjustment knob until—on a subjective level—the music and instruments sound as if they are properly in tune.

Having tried this test myself, and having watched 10 or so other listeners try it, I can report that few if any listeners thought A = 440Hz tuning sounded right. On the contrary, when listening with their eyes closed, almost all listeners chose a setting at or pretty close to the C = 256Hz mark. And let me add that, if you flip the Gadget’s provided bypass switch, so that you abruptly go back to A = 440Hz tuning, standard tuning suddenly sound sharp, shrill, edgy, and stressful by comparison. Interesting, no?

The Gadget will sell for about $200, which will be money well spent—if only because it affords an alternate view into how recorded music could sound, if we had made different tuning choice in the middle of the last ce