We’ve been following the wireless personal audio market with interest. When the Apple iPhone waved ‘goodbye’ to the ubiquitous mini-jack connector, the personal audio world went into a temporary meltdown, then quickly got its act together. The first – and arguably still ‘best’ – wireless connection placed the ‘wireless’ part into a separate U-shaped neckband, which connects by wire to the earphones. While many have switched to ‘true wireless’ earphones that often charge in their own carry case, the wireless headband earphone still has a lot going for it, especially when it’s the Ausounds AU-Flex-ANC.

Some of the clues are in the name. OK, so the ‘AU’ part of ‘AU-Flex-ANC’ is recognising that it’s made by Ausounds, but the other parts are pivotal, too.

The ‘Flex’ part is important for many. I’m going to confess that as a former rugby player of some ‘huskiness’, I’m somewhat neckless, so a neckband is often ‘contra-indicated’ (it ends up feeling like you are wearing a dog‑collar, only without the studs and gimp mask). However, the Ausounds band is extremely flexible and accommodating. OK, if you have Mike Tyson’s neck, that might be pushing it, but for even the most no-neck of us no-necks it fits without a problem. The elegant matt black and contrasting gunmetal-coloured aluminium earphone housings and neckband ends/controller sections are understated and classy, too. 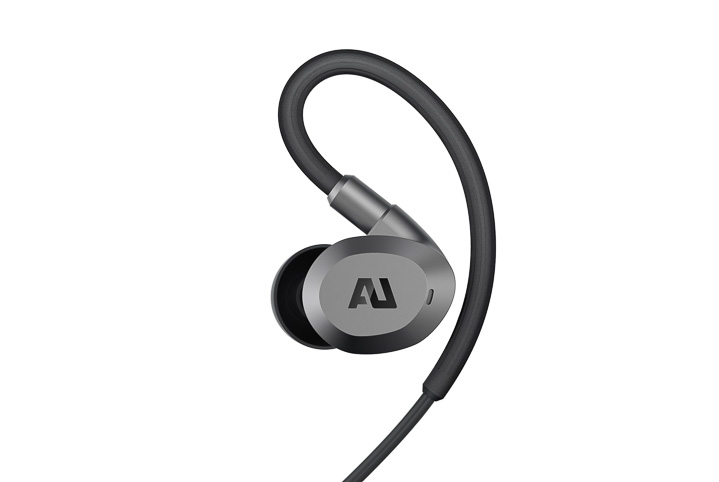 The band itself holds the battery and charger outlet, controls and wireless connectivity. It charges through USB and has a USB-C port on the front right part of the neckband, this also has four buttons and a combined microphone/indicator along the top. When you take the AU-Flex-ANC out of the box, charge it for about an hour and a half initially. The battery is typically good for about 22 hours between charges (10 hours with ANC) and can accept fast charge (15 minutes of juice buys you about two hours of playing). One of the buttons is a multi-function control, which can be used to pair the earphones to a Bluetooth device (it supports Bluetooth 5.0), receive and end calls, and basic track handling. However, unlike other Bluetooth-compatible coding technologies such as SBC (sub-band coding), it operates without any down-conversion of the Hi-Res Audio content and allows approximately three times more data than those other technologies to be transmitted over a Bluetooth wireless network with unprecedented sound quality, and can support high-resolution wireless transfers at a rate of 990kbps.

Then there are a pair of volume up and down buttons that… just do volume. Then there’s the last button, which explains the end of the name.

The little button marked ‘ANC’ engages the Ausounds Active Noise Cancellation system, which connects to little microphones in between the casing and rear housing of each earphone to deliver surprisingly effective anti-phase noise cancellation. While the active noise cancellation doesn’t use some of the more sci-fi ‘shaping’ algorithms used by the big brands, it works well and delivers -25dB of active noise reduction. There is also a ‘monitor’ setting that uses the microphones in each earphone in phase, so you can interrupt your quiet sojourn if someone wishes to speak to you. The ANC button cycles through On-Monitor-Off.

To save battery and prevent accidental Bluetoothing (is that even a word?), the earphones have a Hall effect power-down. So, if you let the magnetised earphone shells join together back-to-back, the whole AU-Flex-ANC unit goes to sleep. Perhaps more importantly, it can act as a full pause for your phone, ending calls or pausing music playing. This is useful when playing music as we’ve all turned a headset off, only to find the music blaring out of your phone’s loudspeaker; it’s hard to maintain your cool demeanour when the people around you know you just played ‘The Birdy Song’ by The Tweets.

We’re sort of saving the best until last because the Ausounds AU-Flex-ANC eschews the usual full-range dynamic driver, a collection of balanced armature drivers, or even a combination of the two. Instead, it features a small planar-magnetic drive unit for the midrange and high-frequencies, coupled to a dynamic driver for the bass. This is installed as a single module within the earphone itself. In theory, that should give the best of both worlds, combining the smooth mids and upper frequencies of a planar-magnetic with the energy, bass depth and oomph of dynamic drivers. There is no provision for tailoring the tonal balance of the two-in-one unit, so you need to like the overall sound the Ausounds earphones make; however, the sound has been designed to please the largest number of people.

In fact, the overall balance is pretty damn good. It’s perhaps a little too bassy for those used to the more light and lean sound that people often associate with audio – especially British audio, in particular British audio based around loudspeakers like the LS3/5a. On the other hand, many listeners find that classic British sound too lean and bass-light in and of itself. The balance here is not boomy or overly bass heavy; the AU-Flex-ANC has a fine sense of presence and authority in the lower registers and doesn’t lay that bass on too thick. Playing the obligatory ‘Chameleon’ by Trentmøller [The Last Resort, Poker Flat records] shows a deep, rumbling bassline without undue flab or filler. The bass has depth and drive (perhaps best described as ‘Phatness’) but it’s also controlled and even, and it gives a bassline an energy that is infectious, even when that bassline is coming from a cello in a string quartet. 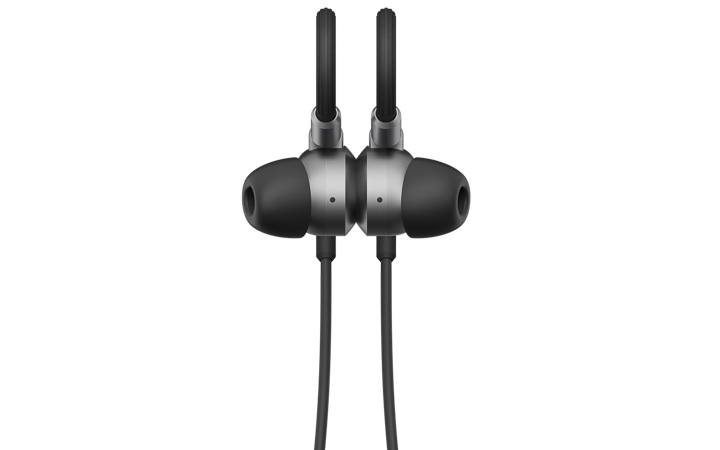 More important from an audio enthusiast perspective, the midrange on up is excellent. The vocal clarity is extremely good, which is obviously incredibly important in what, ultimately, is both a musical performer and a communications device. Voices are clear and articulate with excellent diction, both in terms of listening to an operatic aria, a singer in a band, and vocal quality in telephone, Skype and FaceTime calls. This combination of strong bass and vocal articulation are often hard to reconcile; when you listen to ‘Because He Was a Bonny Lad’ by The Unthanks [Here’s The Tender Coming, Rabble Rouser records] the vocals are distinct and – because they are close-mic’d – the resonant tones of the singers are often easy to exaggerate, but not so here. These are fine folk voices, singing in pure harmony, but without that almost woolly overtone that can plague many loudspeakers and headphone systems.

This excellent midrange extends up to the treble too, which is extremely well balanced. The high-frequency extension is deft and never overblown, something that can be a problem with some IEMs. It’s not a ‘relaxed’ or a ‘laid-back’ sound, but instead presents an effortless and natural sounding treble. This is obviously good for classical, folk and jazz listeners – who want their acoustic instruments to be as natural sounding at all frequencies, it’s also important for those wanting sonic purity in their electric and electronic instruments. I want to hear the squealing drone tone of Public Enemy’s ‘Rebel Without A Pause’ [It Takes A Nation Of Millions To Hold Us Back, Def Jam] with as much accuracy as possible to give it that scorching aggression, just as I want to hear a piccolo or a violin with the same precision. Fortunately, that precision and accuracy is precisely what the AU-Flex-ANC gives you.

Most significantly, however, it’s the ability for the earphones to support and handle higher grade sound than normally expected through mobile wireless connections that makes these earphones soar. The sound benefits because there’s more cogency and presence to the sound compared to even the best of Bluetooth. This comes across best with more sparse recordings where the nearly wispy sound of the likes of Bebe’s Cambio del Piel [Warner] can sound watery and inconsistent on many compressed systems, but realistically this works with almost all kinds of music.

In fact, the only slight downsides are the paucity of ear-tips (four set of silicones in total) and the cloth bag offers little protection when stored. And when it comes to the ear-tips, the AU-Flex-ANC is not a ‘bastard’ size so finding replacements should be easy. 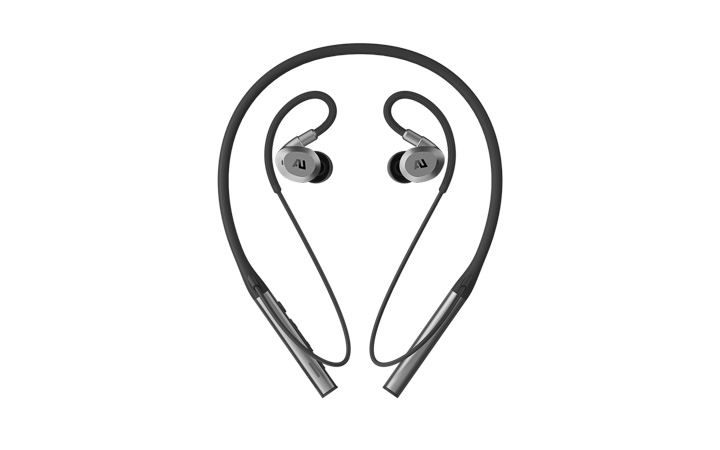 I’ve been using the AuSound AU-Flex-ANC a lot recently, because they are small, light, have a good battery life and sound great. The noise cancellation is effective too. I had hoped to check out their ability to cope with in-flight noise, but something nasty got in the way. I think they are good enough to still be useful when we all start flying again!