Franco Serblin, (1939–2013) one of the great italian speaker designers devoted his life to making some of the world’s finest speakers, initially founding Sonus faber, and then selling the company in 2006 to start a ‘Serblin’ range of speakers under the company name Laboratorium.

Alan Sircom recently reviewed the Accord stand-mount, and hot-on-the-heels of this Laboratorium has recently released the floorstanding version, designed by Massimiliano Favella, constructed in solid walnut, and finished with chrome. It is undoubtedly one of the most beautiful speakers to grace my listening room. Sonus faber, the previous enterprise of Serblin, borrowed the names of some of the great violin makers for their ranges, Stradivarius and Guarneri. It is interesting that just as the great Italian cities were famed for their take on pizza (Neapolitans are soft and thin based, Roman are more crispy etc.), the same is true of the centres of Violin making: Cremona, Milan, Venice, Brescia.

Each family of makers had distinctive sounds; Cremona’s most famous violin-making town was famed for the sound’s sweetness and power. The Venetian sound, by contrast, has a sense of liquidity to it, a sort of liquid mellowness as opposed to the naked Cremonese sweetness. I apologise for the digression, but I am lucky enough to play on a Venetian violin, made in 1710 by Matteo Gofriller. I see a remarkable similarity between the sound of the Accordo Essence, built just 45 minutes from Venice and the sound of the Venetian violin-making school. More of that later!

The speaker sits on chrome spikes, which are adjustable and have small cups which rest on the floor. The Essences are a three-way ported design; a 29mm silk dome tweeter, designed by Ragnar Lian (founder of Scan-Speak), a 150mm mid-range microsphere-coned drive unit, and a 180mm woofer. 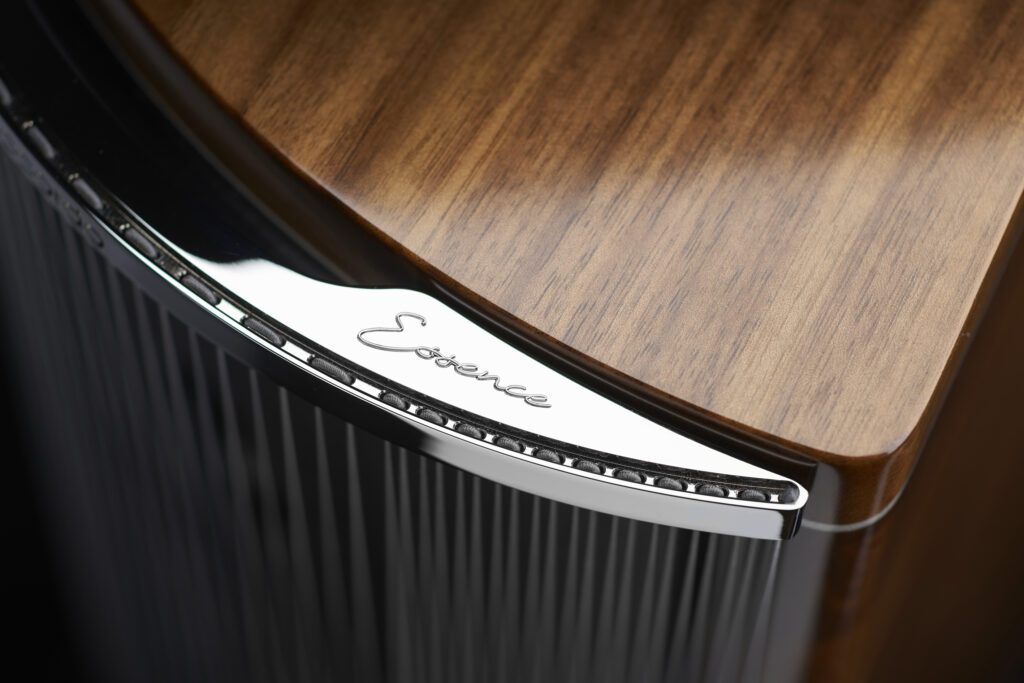 The speakers, like the stand-mounts, are handed and are a wonderfully curvaceous take on ‘rhomboid’. There are ports for both the midrange and woofers; ‘double ported’, I suppose I should say. The rear has high-quality binding posts, only a pair, and no bi-wiring tweakability here! The speakers are internally braced with aluminium and magnesium and weigh 30Kg each. Similar to the Sonus faber range, there are grills constructed with rubber strings. I couldn’t figure out if they were removable or not, but they created a floating effect, like harp strings, and I doubt they affected the sound in any discernible way. Overall, these are objects of incredible beauty and one of the highest scoring Wife Acceptance Factors of any product I’ve reviewed.

The spec suggests that the minimum power output for a suitable amplifier to drive this is 20 Watts. I’m using some 200 Watt VAC Phi’s, which have no problem driving them, but I suspect that 20 Watts isn’t going to be nearly enough to do them full justice with a sensitivity of 88dB.

Listening to them in my system with a dCS Bartok and Townshend Allegri Reference preamp, there is an initial familiarity with the sound. I think that the tweeters are reminiscent of the Scan-Speak tweeters on my Sonus faber Concertino’s, a smooth, mellow, warm sound, and very different to the diamond tweeters on my B&W 802d3’s, which have a stridency which can cause problems with the wrong matching. It’s a highly distinctive top end, rounded, gentle and quite sonorous.

Listening to Leif Ove Andsnes playing the rather extraordinary Beethoven Choral Fantasia [Sony], a piece whose first movement consists of a piano solo and which Beethoven hadn’t finished for the first performance, resulted in him sitting at the keyboard turning blank pages! The second movement, which was finished, has shades of the 9th Symphony, various woodwind/string moments, and a piano and a choir. Entirely off the wall!

The Accordo Essences provide a very alluring sound. That’s really first and foremost. Nothing ugly, shrill or out of place, just a sheer aesthetic beauty to the sound. The drive units show how well chosen they are, as there are no ‘sonic leaps’ between them, just one long mellow continuum of sound. The bass is articulate, clear, powerful, and goes down surprisingly deep for a speaker with a narrowish baffle. The piano texture is uniformly coherent, showing no lack of integration between the drive units. Each drive unit works its part in the overall sound in an even and balanced way. Three drive units, one instrument.

When the brass enters to contradict the strings, the spatial image is good, deep and large; perhaps a little of the spatial information is not quite as present as it could be with the choice of the Scan-Speak tweeter, which prioritises beauty and smoothness above the last word in airy spaciousness. As each musical character takes their place in this bizarre piece, superbly recorded in High Resolution, the vocal soloists keep adding to the largesse of the texture. The Serblins cope admirably, producing a grand scale of sound effortlessly. Not holographic, but well spaced.

Onto Bruckner’s 7th symphony, the epic slow movement, a tribute to Richard Wagner, Bernard Haitink conducting the Royal Concertgebouw Orchestra [re-released in High Resolution, on Decca] provides a powerful rendition of this magnificent work. The scale is reproduced effortlessly, never a rough sound and always beautiful; these speakers will appeal to listeners whose glass is half full. It provides the best orchestral texture you need to appreciate the music. It is at the opposite end of the scale to my B&W 802d3’s, which veer towards the concept of the ‘Monitor’, i.e. what they use in Abbey Road studios to hear the ‘warts’, to see the glass half empty.

I’m sure seasoned audiophiles find that they have the amount of water in their audio glasses that accords with their philosophy of listening. I make a few recordings of my quartet and various orchestras, and there are times when I need to hear the tiniest details, however bright and unpleasant they may sound. On the Serblins, these little eccentricities get minimised, and I was amazed, for example, at just how good the raw feed from the orchestral recording sounded. It wasn’t clear what I needed to do to equalise it because it just sounded good the way it was. Definitely speakers for the end listener and not for ‘Pro Audio’.

Playing some jazz, Art Farmer and Farmer’s Market on Qobuz, initially recorded in the mid-1950s (and remastered), the Serblins hit the nail on the head with that ‘old world’ jazz club sound. They provide toe-tapping rhythmic propulsion and timing magnificently and the rose-tinted approach they bring really works here brilliantly.

Giving the Accordo Essences a spin with another valve amplifier I happened to have from a previous review, the Prima Luna Evo 400 integrated amplifier, which came furnished with EL34s, proved a good partnership. They are slightly less bright than my VAC Phi 200s, and EL34s are more airy and spacious than KT88s on the VACs, so in Triode mode, they seemed to complement the Serblin’s well.

Listening to Haydn’s Sinfonia Concertante, Sir Simon Rattle conducting the Berlin Philharmonic [Warner] really sounded lovely, full but with some extra space and air. Interestingly, the choice of valve makes such a critical difference here. I have to speculate whether a brighter transistor amplifier will work well; I’m not sure it would give the same airy quality that an EL34 brings to the party, but it would be worth a hearing.

The Accordo Essence is a truly unique proposition. They look stunning, curvaceous and fabulously constructed in a natural wood that assures the most anti-audio partners! Their sound, as I discussed earlier, bares a striking audio resemblance to the violins made in the golden age of Venetian violin making; not bright and sharp, but liquid and smooth, not known for their vast power, but a pleasingly balanced and warm sound. They seem to extract the best from a piece of music without being overly analytical and appeal to the actual music lover who just wants to enjoy their music. Even if that music arrives in a romantic rose-tinted way. It is worth careful partnering with a suitable amplifier. Valves are a sure-fire winner, but EL34s work best in my system. In these dark times, who wouldn’t permit this marvellous sonic indulgence?