These feet were tried under a number of components and loudspeakers but it’s worth noting that most of the components were already on a well isolated Townshend Seismic Stand, which should keep a fair amount of energy at bay. First up were Eggleston Emma Evolution loudspeakers; these weigh just over 31kg and stand 109cm tall on their cone feet. Putting the Slim feet under them made the bass sound fuller, increased the scale of image thanks to greater apparent dispersion and added depth to the image. It was an enlivening, opening-up effect that seemed entirely beneficial and also took some of the edge off the presentation, as if the speaker had become a bit more refined. Switching from Slim to Fat feet brought a calmness to the presentation that was very appealing, the sound becoming relaxed and yet remaining precise, as if distortion had been reduced. On another piece of music the reverb became clearer and there was more space between notes, a string quartet sounding less frenetic and more cohesive.

Putting three of the TH feet under an iFi Pro iDSD DAC had a similar effect, relaxing the sound and bringing out nuances in the music. That was with the DAC on the Seismic Stand; starting with it on something more mundane brought the same effect but to a greater degree, with decay, scale and focus all being enhanced. A solo piano piece losing a lot of its ‘clang’ and replacing it with better timing that made the performance more involving. The three Classic feet did a similar job but revealed more low level detail, dynamics, scale and presence in the recording. 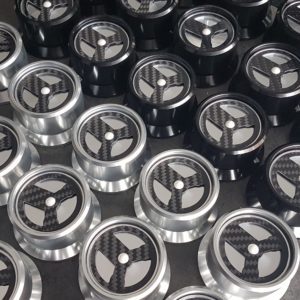 I did the same thing with a Rega Planar 10 turntable on the Seismic rack and that brought even greater rewards, the TH feet relaxing the sound significantly by taking away edginess and softening the presentation without undermining detail. Voice was particularly well served here with a perceived increase in nuance, dynamic range and dynamic contrast. Encouraged by this I tried the Classic feet under this three legged turntable and was hit by a sense of three dimensionality that was stunning, making the imaging genuinely tactile and adding weight and substance to the bass. Van Morrison’s Astral Weeks [Warner Bros] retained its crude character but projected into the room a lot better with far clearer separation between instruments and voices.

I tried the Slim and Fat feet under a pair of PMC twenty5.26i speakers which have a degree of built in isolation, here the result was similar to elsewhere with a calming of the presentation that allowed more of the tonal radiance from piano through while enhancing the sense of timing in no uncertain terms. I particularly enjoyed the way they separated backing vocals from the lead on one track, even though the two were in harmony. Dropping the Fat feet under the same speakers did the same again but more so, enhancing decay, scale and depth of image before making it clear that there was rather more drama and feeling in the piece than is usually apparent, in fact it became very involving which doesn’t often happen with Haydn quartets in my experience.

The Franc isolation feet work and work very well. They are well built and finished to a high standard. If you want to get a better idea of what your system is capable of, what your music really sounds like, I suggest you give them a spin.