The Axpona (Audio Expo of North America) show in Rosemont Illinois has become the largest Audio show in the US. Occupying 8 floors and 140 rooms the show dominates the Westin O’Hare for a three day show the third weekend in April every spring. HiFi+ brought the team together from the US and the UK to bring the show to you in our collective coverage. My assignment was amplifiers and digital front ends with an emphasis on new gear and best sounding rooms. Three days is not enough to cover everything! Some prices were not posted and full rooms make questions a challenge. If I missed something, my apologies. The pen was flying and my camera is now cooling off after the frenzy. 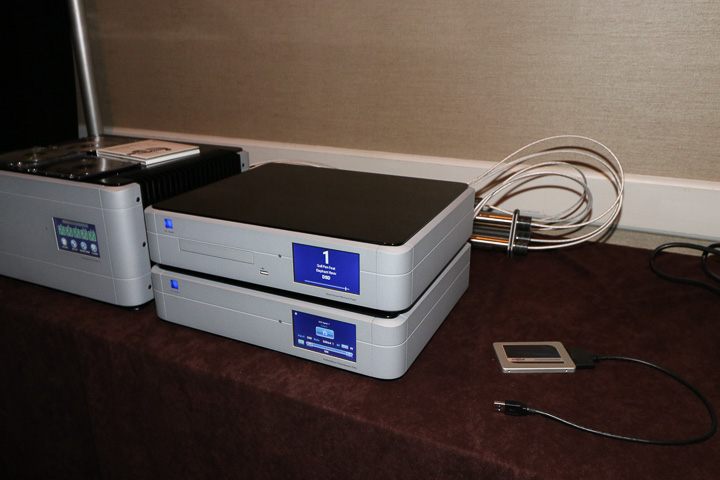 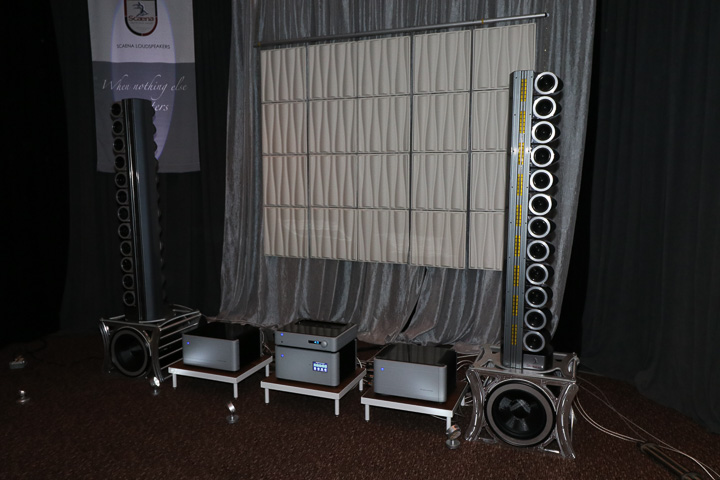 The first room up was the Scaena/PS Audio room feature a full PS audio rig and the new Scaena tower speaker featuring the full force sound of their $116,000 USD flagships coming out of their new $56,000 USD speakers. The Digital front end consisted of the PS Audio DirectStream DAC ($6,000 USD) and the new DirectStream Memory Player ($6,000 USD) which connects to the DAC via an I2S Connection. The output fed into the PS Audio BHK Pre-Amp ($6,000 USD) and then to the PS Audio BHK 300 Monoblock amplifiers. Gear was plugged into PS Audio P10 Power Regenerators ($5,000 USD) The sound was full and musical in the very large room. It was a satisfying start to the show! 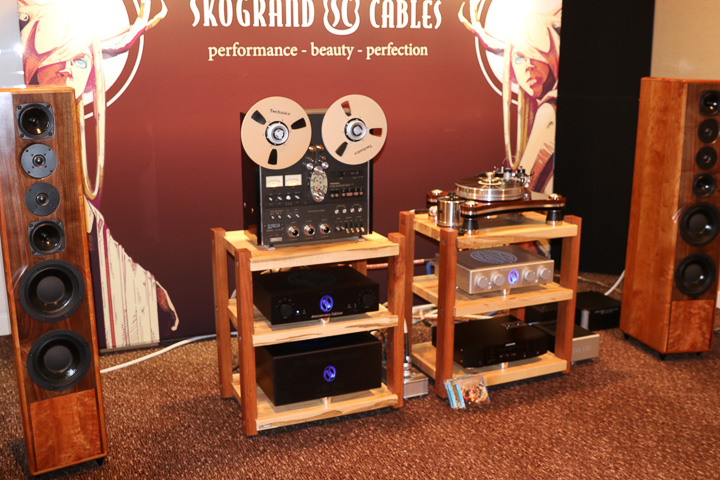 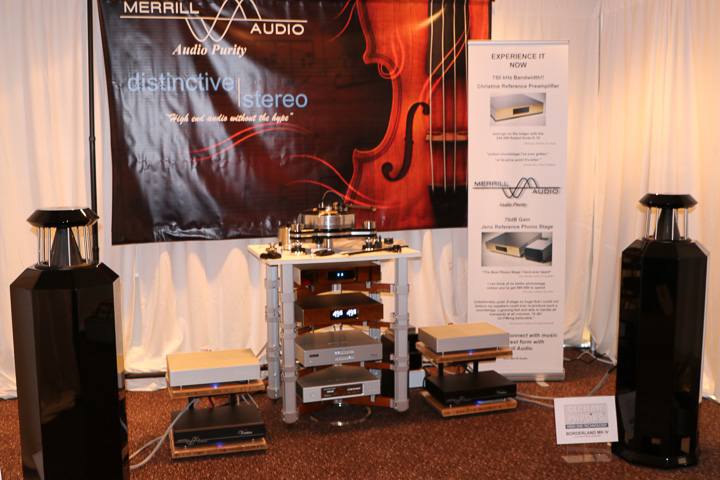 Merrill Audio was showing their Christine reference Pre-amp ($13,000), Jens Reference Phono Pre ($15,449), Veritas Monoblock Class D amps ($12,000 per pair) and their ANAP XLR ($1,049) interconnects and ANAP speaker cables ($1,049). Digital front end was an ESS Labs DAC2x ($15,500) and Aurender N10 music server ($8,500 with 8TB). Music was delivered by the German Physiks Borderland MK IV speakers ($36,500). I am a fan of Merrill amps. Anyone who has preconceived notions of harsh and Class-D need to leave them at the door. This system was clear and tuneful. The Aurender N10 is a digital champion for music serving. 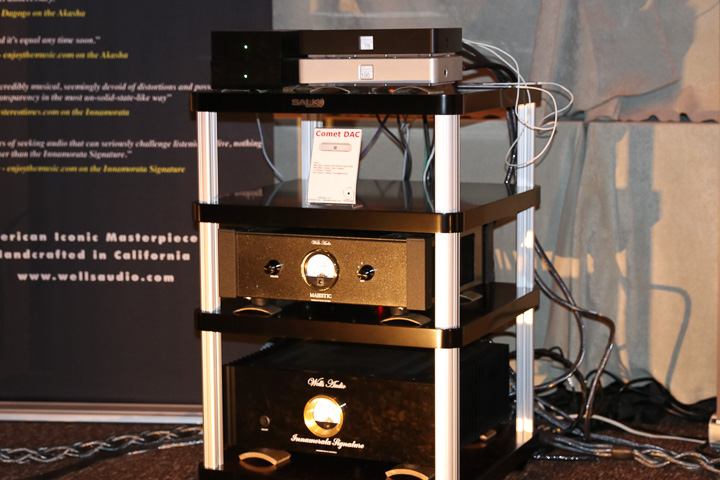 Wells Audio was showing their Majestic integrated amp ($3,499) and Innamorata Signature 150wpc at 8 Ohms amp ($15,000) with Salk Speakers Exotica 3’s ($12,999) and Exogal Comet DAC. Sound was precise and full. The Innamorata is an extraordinary amp with a black background and very low noise floor. 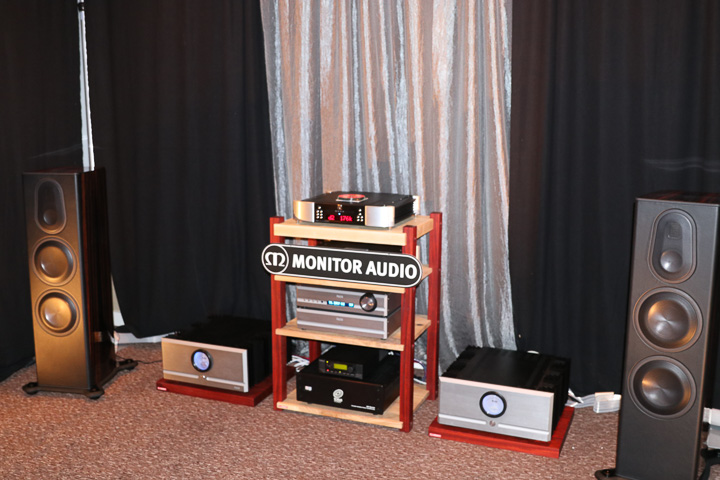 Monitor Audio brought in Pass Labs XA 160 Mono’s and XP 20 Pre-amp along with a Simaudio Moon 650D CD/DAC to pair with their excellent PL300 II speakers. It was a simple but elegant system. 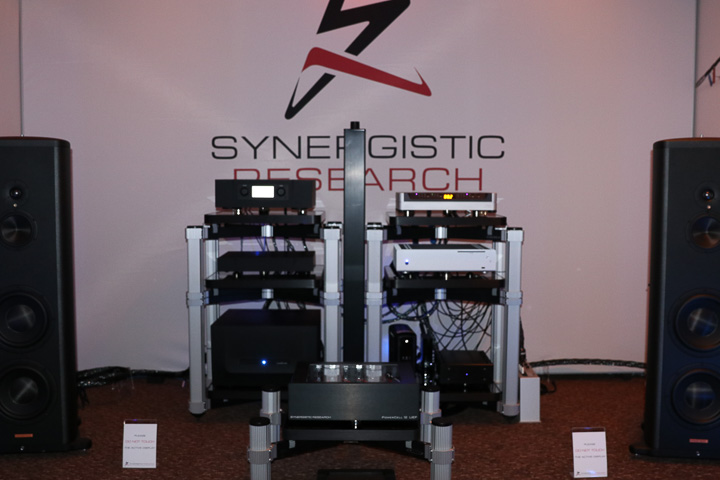 Synergistic Research and Scott Walker Audio brought a host of high end gear to show off their room treatments and other sonic legerdemain. Constellation amps fed by A Berkeley Audio Design Reference DAC were complimented by the Synergistic Research Galileo UEF Cables, Room treatments and PowerCell 12 UEF SE all feeding a pair of Magico S5 mkII speakers. The demo was impressive! 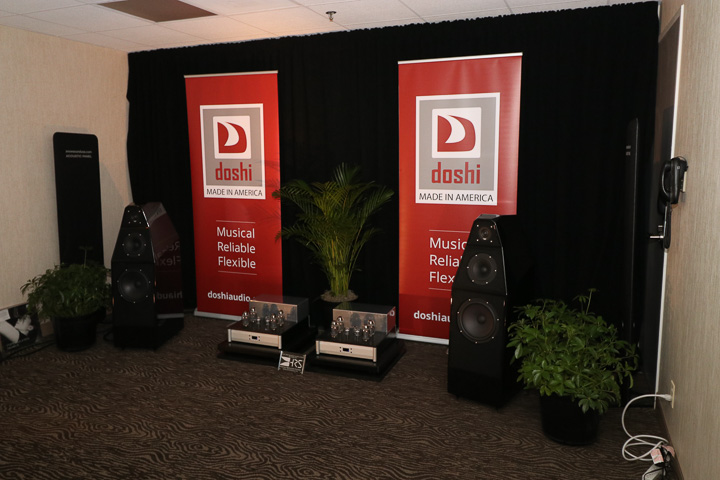 The smaller Paragon Sight and Sound room featured Nick Doshi previewing his new Tube stereo amp featuring a quad of KT150’s for 75wpc into 8 ohms ($15,995). It is expected to be released in September. His Monoblocks were driving a pair of Wilson Audio Yvette’s ($25,500).  The systems digital front end was the dCS Rossini DAC ($23,999) and Clock ($7,499). Transparent Reference speaker cables were also used ($8,745). Nick and Paragon were doing their best to contain some difficult room boom. Despite this I enjoyed the demo and the synergy between components. 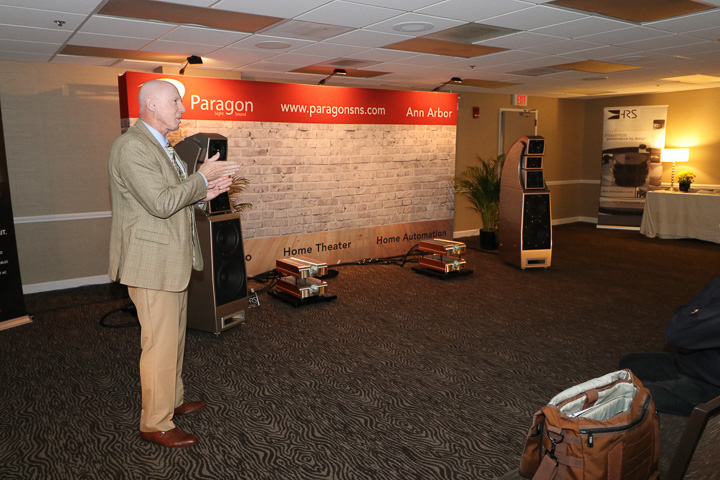 The big Paragon room features Wilson’s…The Man, David Wilson and a pair of his son Daryl’s latest creation, the Alexx ($106,000 per pair) While this was displayed last year I had not seen them driven by a QUARTET of D’Agostino momentum monoblocks running 1600 watts at 4 Ohms! Steampunk at full power! The mighty dCS Vivaldi stack ($120,000) drove the digital front end. As expected the sound was full and powerful. For a total system price nearing $400,000 it was as impressive as you would expect. 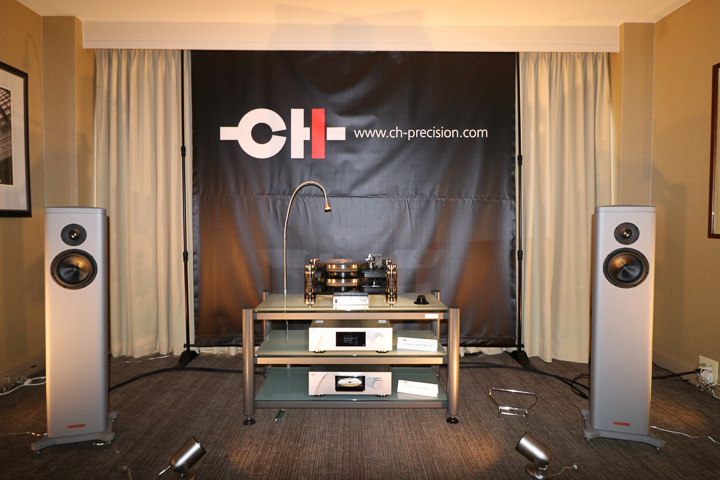 CH Precision is another high performance Swiss audio company that is beginning to gain a US following. This room featured their I1 Universal Integrated Amplifier (100 wpc into 8 Ohms) factory fitted with a Digital in board, 2 RCA and 1 XLR inputs and an XLR stereo pre-amp output. ($38,000 as configured) the unit has multiple configuration options via a variety of input boards. Their D1 SACD player/DAC ($38,000) was fronting the system that was feeding a pair of Magico S1 mk II ($16,800) speakers. The sound was excellent with full bass and clean clear highs. 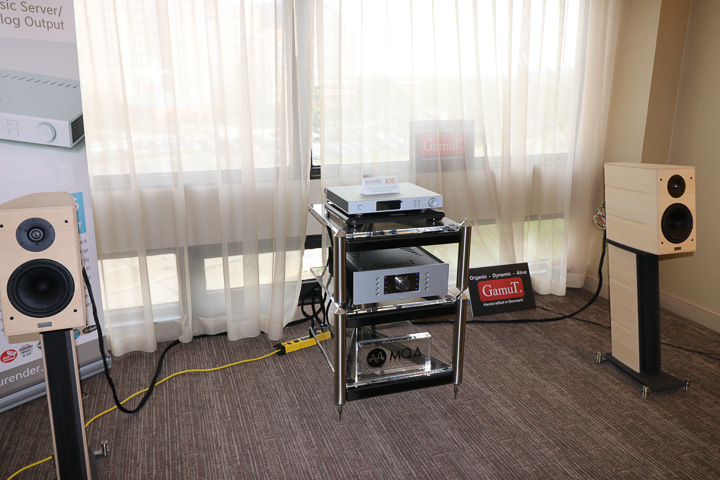 Aurender was featuring their new A10 Music server/DAC ($5500) Powering the system was the GamuT Audio DI 150 LE Integrated amplifier with 180 wpc into 8 Ohms ($12,990). Speakers were the highly-regarded stand mount Gamut RS3i’s ($20,990). This is a simple and fantastic sounding system. The A10 has both a high performing DAC as well as a music server that is like their N100 server. It is a serving/streaming one stop shop that takes full advantage of their iPad app for music control. I went back a couple of times to listen in here! 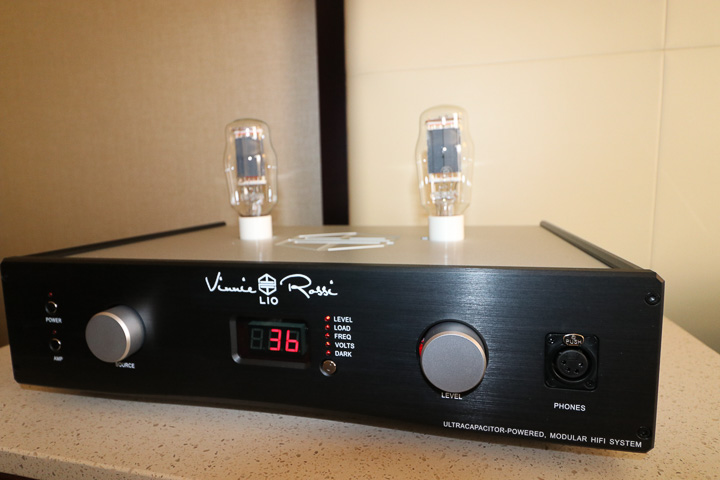 The Vinnie Rossi LIO is a modular triumph in sound and quality. Here is the tricked-out model which includes the Direct Heated Triode front end. Sporting the Phono Pre, DAC and 25wpc amplifier modules this version of the LIO comes in at $11,675. Paired with the 40th anniversary model Harbeth Super HL5Plus at $7495 and Triode Wire Labs cables the sound was truly three dimensional. 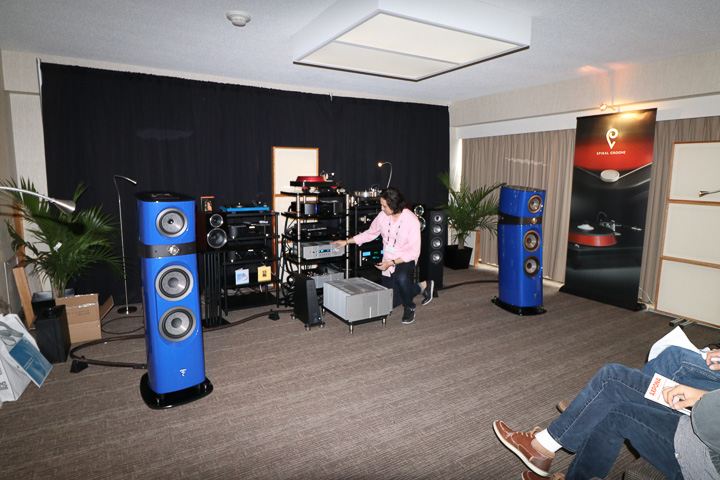 I am stretching things with this room as it is really an analogue room and the amp is not new but The Music Direct room had terrific sound courtesy of the Focal Sopra No.3’s ($19,999). Fueled by the Balanced Audio Technology VK-655SE ($16,495) and the Marantz SA-10 SACD player ($6,999) the room really delivered. I suppose the AudioQuest cables, Shunyata power devices and Spiral Groove Revolution TT ($24,000) and Koetsu Blue Lace Onyx Platinum cartridge ($14,995) may have been useful too. Good work by Jonathan Derda and the Music Direct team. 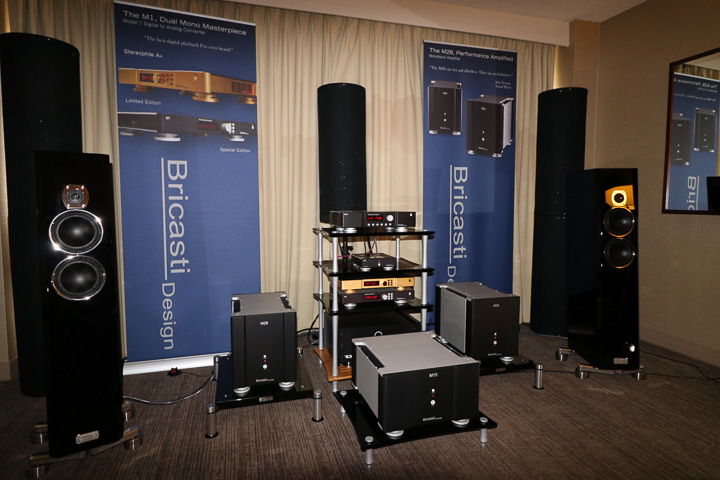 Brian Zolner was demonstrating the new M12 Source Controller ($15,995) and M5 Network Player ($2000) feeding their M28 Monoblocks ($15,000 each). Speakers were the Tidal Piano Diacera’s. The soon to be released M5 can be used by any system to add streaming capabilities. Also on display was their new M15 stereo amp ($18,000) bringing most of the M28’s punch and finesse to a single box stereo solution. Oyaide Cables and Stillpoints isolation gear completed the strong presentation. The sound was precise and musical. 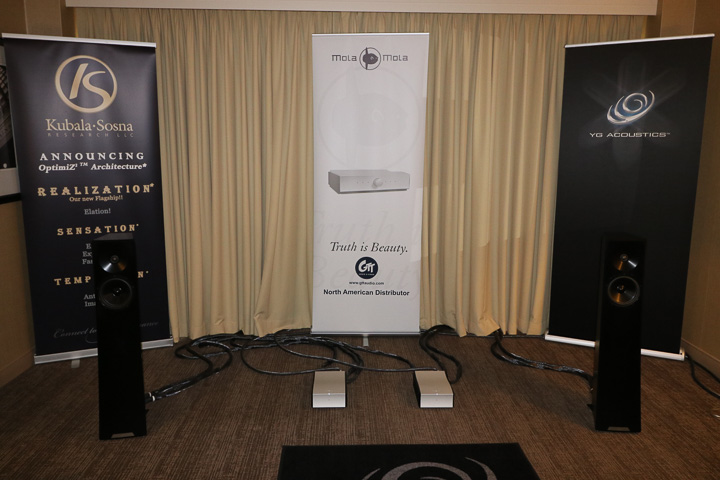 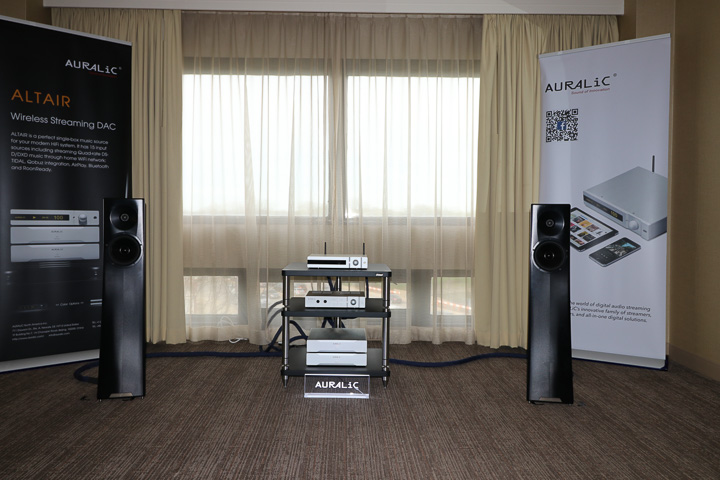 The Auralic room featured the recently reviewed Class-D Integrated amp/DAC/Streamer Polaris (£3,499 issue 145) fronting the YG Acoustics Carmel 2’s. The Polaris may be a more affordable device however, as pointed out in the review it is fully capable of driving high performance speakers with aplomb. The soundstage was large and precise. A fun room to be sure! 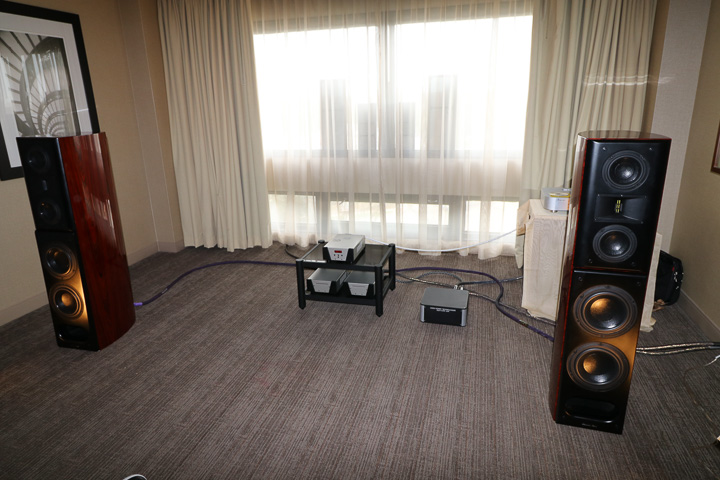 Wyred 4 Sound, a California based solid state affordable audio form was showcasing their 10th anniversary SX-1000R Class-D monoblocks 625wpc into 8 Ohms ($1,799 each) and their DAC-2v2SE DSD DAC ($4499) feeding the terrific Acoustic Zen Crescendo’s ($22,000). The Crescendo’s are known to be a clean and accurate speaker. The Wyred 4 Sound amps have been gaining recognition for their high performance regardless of amp class. This was, for me, one of the best sounding rooms at the show. With Tony Holt from Wyred 4 Sound and Robert Lee of Acoustic Zen both available to answer questions it I witnessed both responding to the inevitable “Class-D can’t be that good” comments. Hearing was believing! 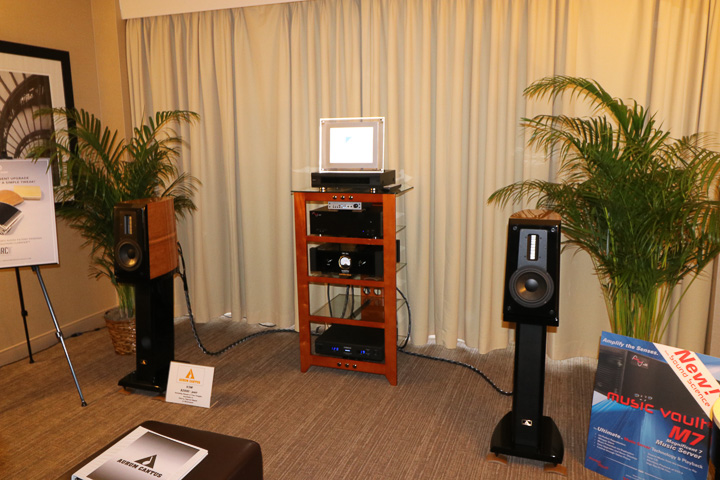 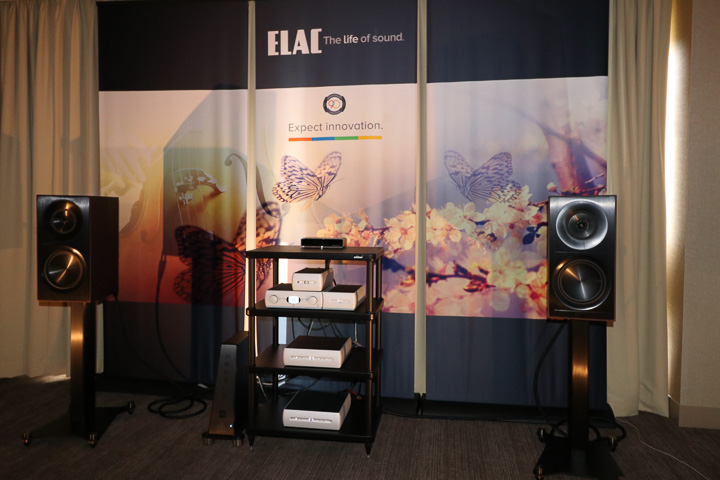 Who likes a bargain? Who likes one that also sounds terrific. That is the big deal in the ELAC/Audio Alchemy room. Since combining forces last year the synergy between Andrew Jones and Peter Madnick is on a roll. ELAC’s terrific Discovery Music Server ($1099) comes with Roon installed. Paired with the Audio Alchemy DPA-1M Mono’s ($1995), PS-5 Premium power supply ($595), DMP-1 Digital Music Player ($1795) ELAC Adante AS-61 stand mount speakers ($2500pr) AudioQuest cables and Shunyata Denali D6000T Power conditioner ($4995) and power cables the system was affordable, attractive and reasonably compact. I am anxious to see where they go from here!

Boris from Amped America tells us about the AAP-1 preamp and the AMP-2400 Class D amplifier.

Liam from DCS talks Vivaldi DACs and streamers at Warsaw

The CS1 will be available in retail shops and NADElectronics.com

The next generation Momentum features a new, expanded soundstage